About Queen of the Miraculous Medal Parish

The Catholic family of Queen of the Miraculous Medal Parish, is called by the Spirit to a life of holiness through Word, Sacrament, and Action.

Queen of the Miraculous Medal Parish is a vibrant, growing parish of over 1,500 families located in Jackson, Michigan.  Our first Mass was celebrated on June 24, 1934, in a home on Michigan Avenue.  A building for a parish school was finished in 1941, and this building also served as our church until our current church was completed on April 23, 1950.  A fire in the sacristy led to a renovation of our church in 2009.

From its inception until 1996, the parish was served by the Vincentian fathers.  Since that time, the parish has been served by priests of the Diocese of Lansing.  For decades, the parish school was staffed by the Adrian Dominican sisters.

Our parish school has undergone numerous expansions through the years, and currently educates approximately 275 students in grades k-6.  The parish retains close ties to Lumen Christi Catholic School (grades 7-12). From 2010 through late 2018, the priests of Queens also pastored the parish of Our Lady of Fatima in Michigan Center.

Today, we continue the Vincentian spirit,  as a novena to Our Lady of the Miraculous Medal is prayed each Tuesday and Saturday.

We look forward to welcoming your family into our parish family!

The first parish in the world to take the name Queen of the Miraculous Medal, what today is commonly referred to as “Queens” has grown into a large and vibrant community of believers and servants in Jackson.

It was the depths of the Great Depression when members of St. Mary Star of the Sea parish petitioned Bishop Michael Gallagher to form a new parish that would serve the expanding Catholic population in the southwest section of the city. Founded with 140 families, Queens has grown into Jackson’s largest parish and one of the largest in the Lansing diocese.

Bishop Gallagher established Queens by inviting priests from the Congregation of the Mission – known as Vincentians – to serve the parish and appointing Fr. Arthur Keegan as the first pastor on June 7, 1934. The first Mass was celebrated less than three weeks later. The archdiocese of Detroit (the diocese of Lansing was not formed until 1937) loaned the new parish $25,000 to purchase the city block bordered by Carlton, Bowen, Morrell and Wisner for establishment of the parish grounds. While construction took place, Mass was celebrated in the Knights of Columbus house at Wildwood and Michigan, and daily Mass was offered and sacraments administered at the rectory down the street. Bishop Gallagher chose the parish’s name in honor of Our Lady, the Queen of the Miraculous Medal. The Blessed Mother had appeared to St. Catherine Laboure in 1830 and given her the design of the medal of the Immaculate Conception, and those who were devoted to the Blessed Virgin received extraordinary favors.

The priests moved into a new rectory purchased on Morrell opposite the parish property in 1938. The new basement church on Morrell was opened later that year when Fr. Leon Cahill celebrated Christmas midnight Mass. When the finished church was dedicated by Bishop Joseph Albers in April 1939, Queens had grown to 280 families.

Catholic education was a priority for the young parish. Beginning in November 1939, three Dominican sisters from Adrian taught religious education classes in their convent on W. Franklin. Queens School – eight classrooms built atop the church – opened Jan. 27, 1941, with 170 students in grades K-8. As the school and the number of nuns grew, a larger house on Carlton was purchased in 1945 to become the new convent. An addition of 14 rooms and a chapel was completed in 1966 on this building.

A building fund campaign begun in 1947 led to ground breaking on a new church building in April 1948. The first Mass in the new church was celebrated April 23, 1950, by pastor Fr. John Dougherty.

A second school building, featuring eight additional classrooms, kitchen, cafeteria, gymnasium and offices, was constructed in 1954, fulfilling Fr. Daugherty’s dream of a parish social center. Six years later, this building grew by eight classrooms when a second floor was added. Fr. Dougherty, who had been assigned to Queens since its inception, left in 1956 with the parish boasting 900 families and 950 pupils in the school. In the 1963-64 school year, Queens School reached its peak enrollment of 1,183 students, with its largest First Communion class ever, 183. The parish had grown to some 1,400 families.

In 1981, with four nuns remaining in the convent, it was announced that building would be remodeled and become the rectory and parish office, with the priests moving from the house across Bowen that had served as the rectory since 1949.
Having grown to more than 1,800 families, Queens celebrated its 50th anniversary in 1984 with numerous activities, culminating in a Golden Jubilee dinner on June 21 and the 50th anniversary Mass celebrated by Bishop Kenneth Povish followed by a parish picnic on June 24.

The prayer life of parishioners was enhanced in February 1993 with the establishment of the Chapel of the Divine Mercy. The adoration chapel, just the second in the diocese, assures someone is in the presence of the Blessed Sacrament around the clock.

With a need for them to serve elsewhere, the Congregation of the Mission removed its priests from Queens in 1996, and since then the parish has been served by Diocese of Lansing priests.

A fire that began in the sacristry caused extensive damage to Queens church on Dec. 3, 2008. No one was injured in the fire, which destroyed the sacristry and left major water and smoke damage in the sanctuary. While Queens priests celebrated Mass at St. Stanislaus church, Queens was renovated with a new layout featuring pews in a semi-circular pattern around an altar with the altar rail removed, new carpeting and paint, and new stained glass windows. Parishioners returned to Mass on May 3, 2009, when the church was rededicated by Bishop Earl Boyea, followed by a picnic commemorating the parish’s 75th anniversary. Later that year, the renovation was complete when a new entrance off the parking lot, including an elevator to the sanctuary, was completed to allow greater accessibility.
Witness to Hope, a diocesan-wide capital campaign launched in 2017, raised $3.5 million for facility improvements at Queens, the most notable being the construction of Vincentian Hall. What was storage space in the church basement was transformed into a large gathering space that is used for all manner of church events. The hall was named in honor of the priests who served Queens for 62 years. 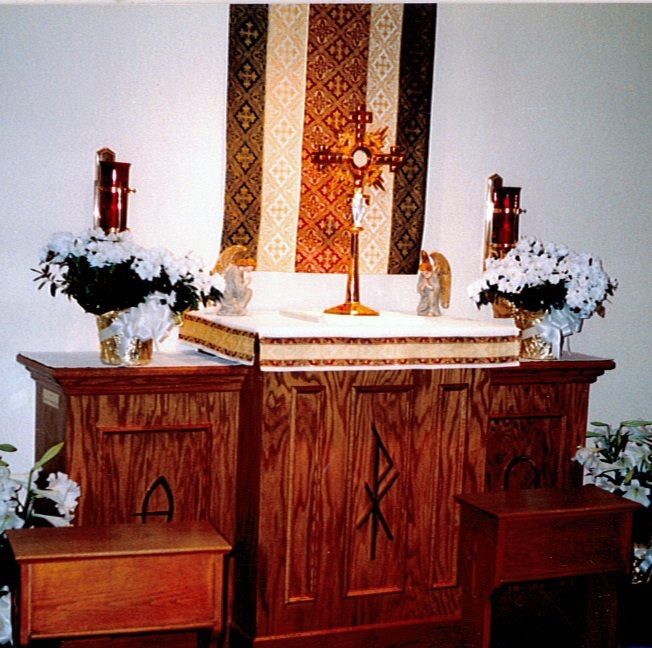 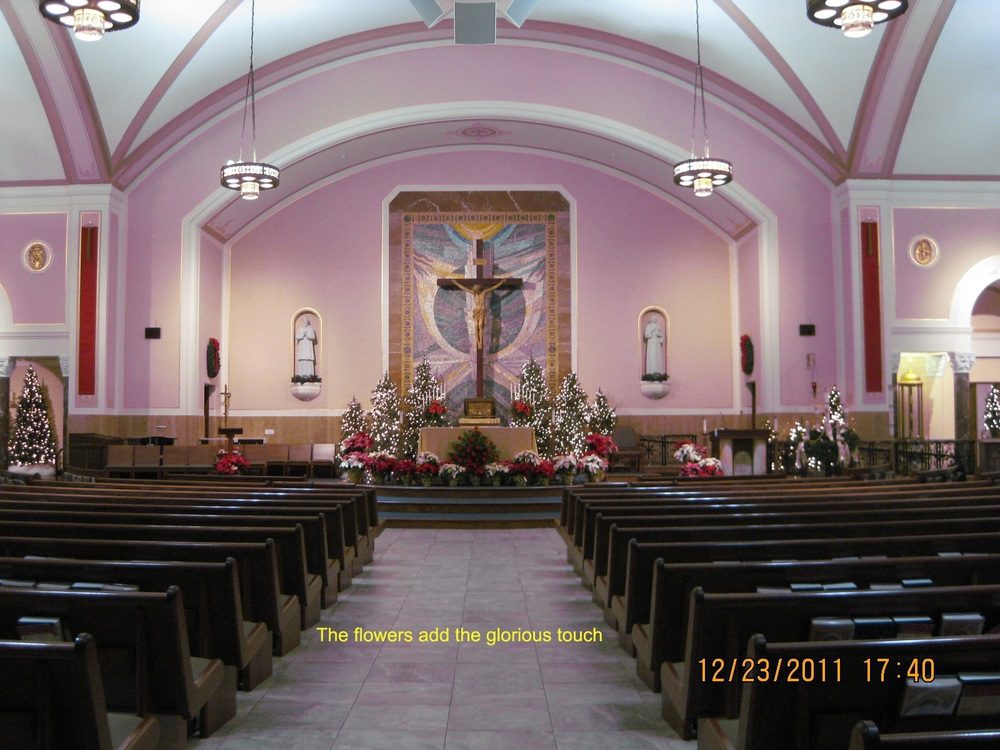 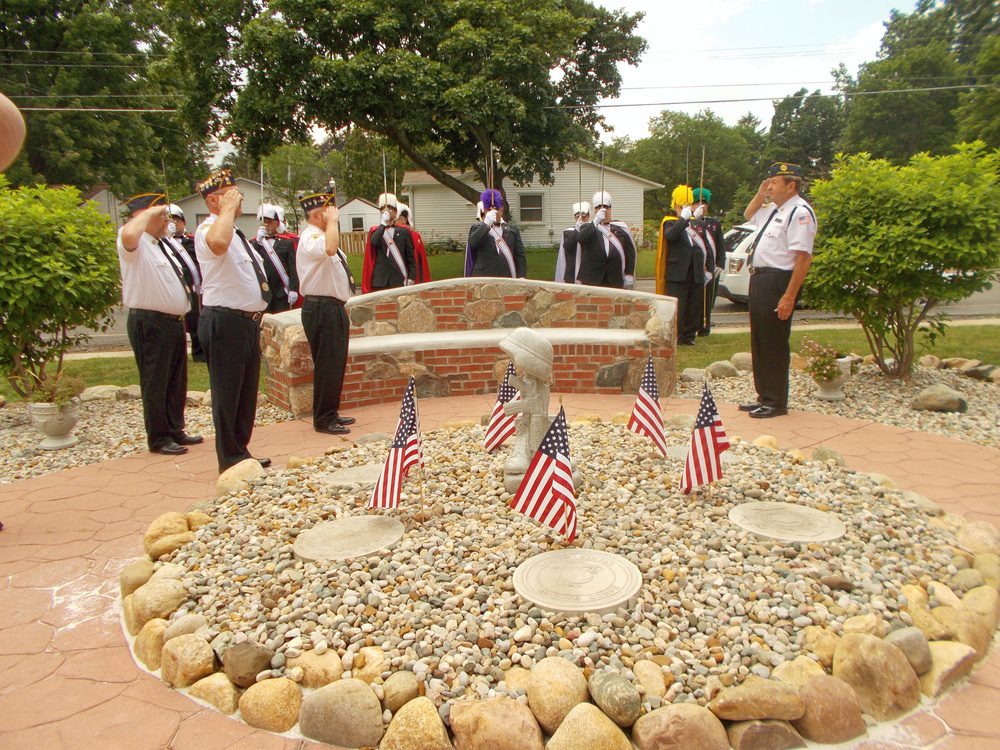 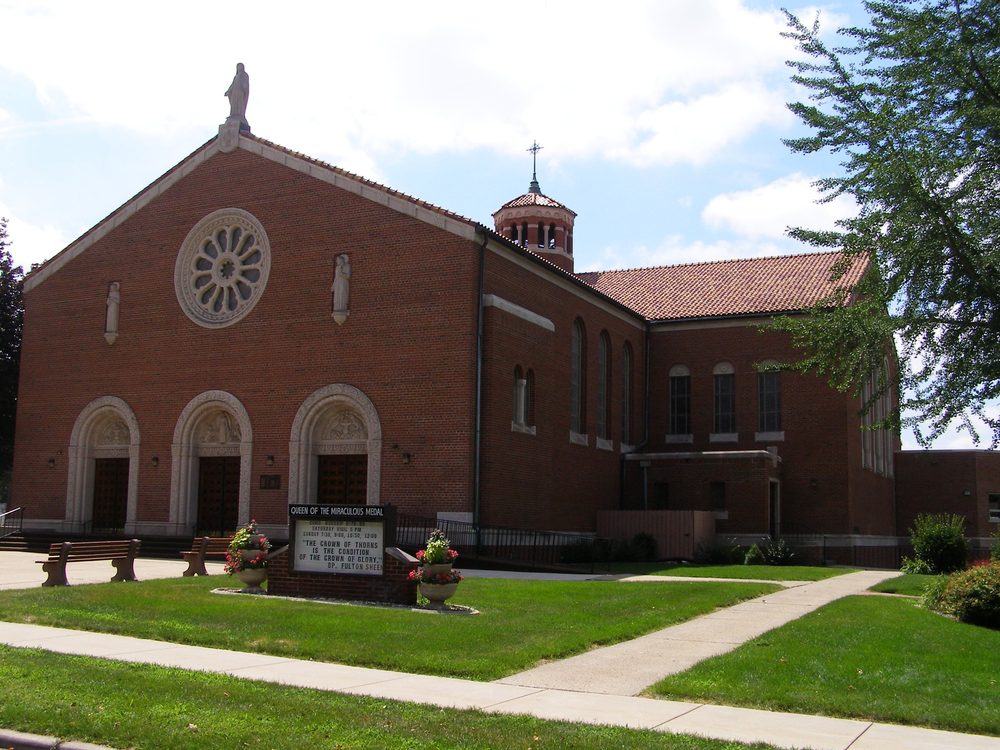 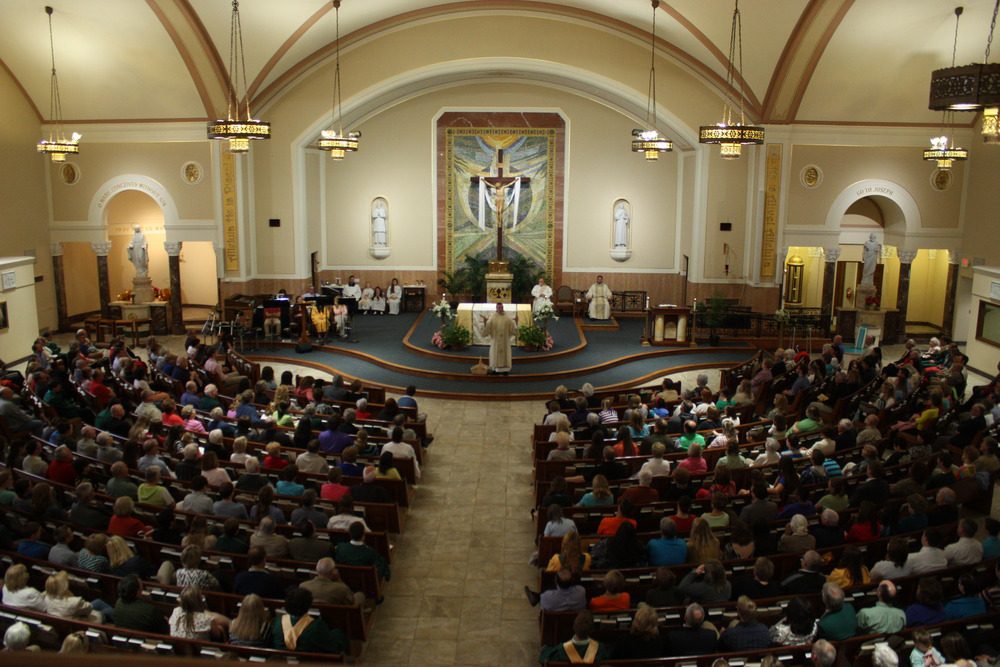 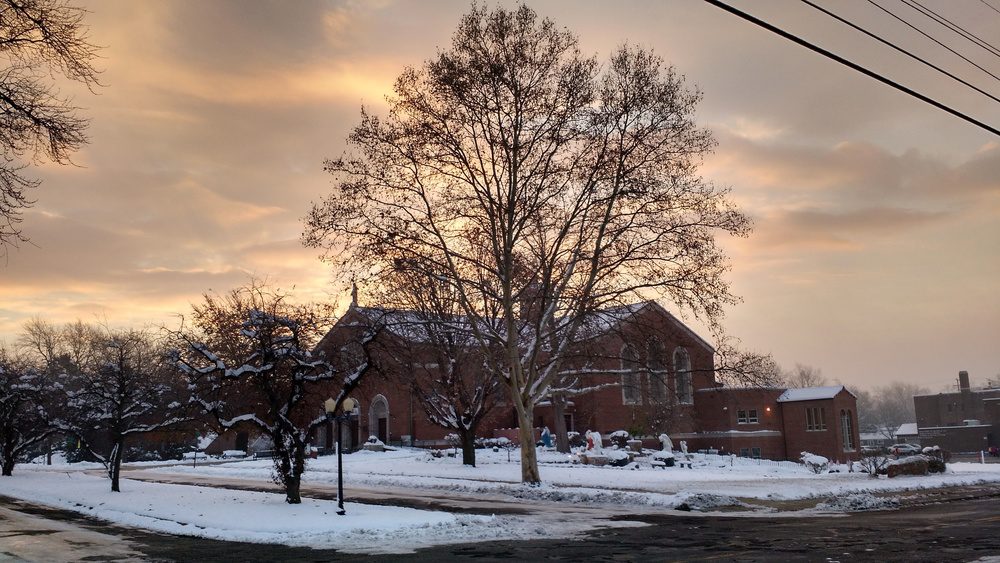 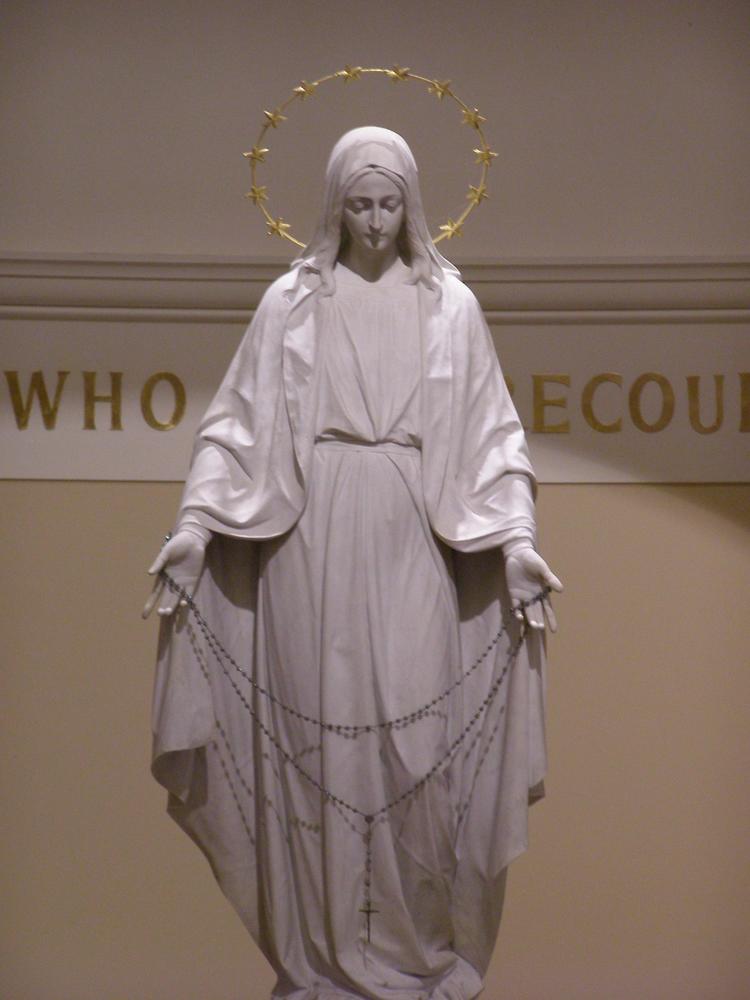 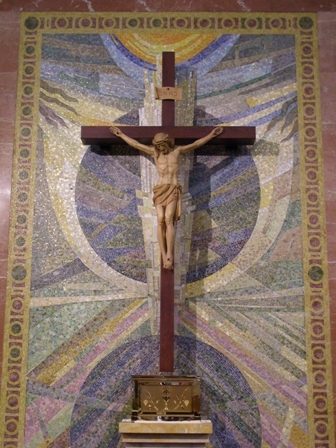